Have we lost the ability to speak freely and have the right to say how we feel without offending?

As a committed ‘lefty loony’ and part of the ‘liberal establishment elite,’ I’m aware that I am committed to equality for everyone and that hate speech has no place in a normal civilized world. But have we gone too far? Are we actually able to say what we feel?

In the 80s I used to watch a programme called ‘Allo ‘Allo. It was a comedy programme set during the Second World War and was extremely funny. I mentioned it to a friend who said that she didn’t watch it as it perpetrated stereotypes of people from other countries. I thought it was a little harsh and over the years I realised I just couldn’t agree with her.

If you look at comedies and other forms of humour a lot of characterisations are based on stereotypes. The slightly racist (Basil Fawlty – Germans) the homophobic (Jack – Will and Grace – Girl Trouble) where Jack makes derogatory remarks about a lesbian couple. We delight in characters that can make us laugh about our lives and try not to take things too seriously.

In the UK hate speech is defined if someone “Using threatening abusive, insult words or behaviour …” whether it’s spoken or written and likely to stir up racial hatred. So parody of someone with the intent of humour is certainly different from someone who intends to cause a reaction whereas it will inflame hatred amongst certain groups. 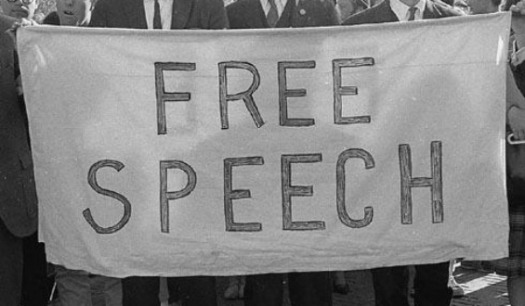 I don’t like Milo Yiannopoulos. I think he is an appalling person with abhorrent views. But his right to free speech turns problematic when he like others of the ‘alt-right’ make gross generalisations of certain groups. It becomes more problematic as social media and similar platforms have allowed everyone to have their say and at the moment it’s a deafening cacophony of noise. Where no one hears anything or understands it.

In watching some reaction to protests in the USA it’s interesting to see that people seem to be ‘triggered’. That the minute that someone opens their mouths to speak it seems to offend.

A lot seem to be protesting that we cannot say anything without being censored. Although the above cartoon is a parody of this, there are numerous incidents when genuine free speech has been censored. This worries me greatly and I think this, like other trends that have come from the USA, will soon arrive in the UK and increase over next few years.

I know that a lot people don’t like gay people and marriage equality. I will defend the right of people to say that they don’t agree with it. But when you try and stop someone marrying or even having a relationship with someone of the same sex then it becomes a problem.

*Gay people shouldn’t be able to marry – no problem

*Gay people should be killed for who they are – Hate speech