Tomorrow people will vote in European Elections something we shouldn’t have been a part of due to the UK supposedly leaving the European Union.

In the previous few weeks of campaigning we have seen high profile incidents where MEP candidates have had milkshakes thrown at them. Some have seen as a childish pranks and others have classified it as ‘domestic terrorism’. What ever your views on this doesn’t take away the real issue people should be talking about. Why are they people being covered in fast food drinks?

Far-right commentators are quick to blame ‘militant far-left agitators’ and see it as a divisional argument where two sides of a political debate are waring for attention and support. This divisive tactic for me makes people believe that there are competing enemies ready to defend their beliefs and use varying methods of protest. I think there is a simpler point that’s being made.

People are utterly fed up of hearing hatred and vilification of various communities and minorities. Conspiracy theories are now so engrained in some that they have become part and parcel of everyday life. In a blog post last year I wrote about how the conspiracy theory is the new religion. We have accepted revisionist history lessons as if they were fact. Happy to embrace far-right tropes such as ‘Islam isn’t a race therefore it’s not racist to criticise it’ (or demonise an entire religion).

As I explained about confirmation bias we look for possible information to back up our own beliefs without actually thinking rationally about a situation or event. We are constantly on the search for material that panders to our own fears and prejudices. For example, say I am afraid of spiders I see a story about a man who was hospitalised due to a bite from a spider on holiday and we confirm in our minds the reasons that we hate spiders, and don’t read the rest of the story that explains the man was hospitalised due to the wound being infected, rather than the actual spider bite. The danger doesn’t come from the spider but the infection that is caused and could have happened in any other way in which skin is broken and allowed germs breed and spread.

I try to look at a situation rationally and objectively. See the reasons behind someone’s actions. I don’t follow any religions and dismiss conspiracies and theories not facts. The recent increase in measles is without a doubt down to parents listening to lies that vaccines cause autism. They don’t. There is no proof just one discredited medic with an opinion.

These theories that can spread quickly over social media and they become irrational when parents are willing to endanger their own children but not getting them vaccinated against deadly but treatable diseases. Rational thought is dismissed and science thrown away. If make this rational statement on social media I can guarantee within a few minutes I will have someone popping up on my timeline to argue the case that the ‘conspiracy’ is true and vaccines are bad for the world.

For me Farage is the arse-end of politics. He has used the theory of leaving the EU as a basis of political debate and whether you agree with him or not, it is clear the far-right xenophobes have latched on to believing that if the UK does eventually leave then the freedom of people to come in to the country will some how be immediately stopped – it won’t.

The hypocrisy of some people can be seen from space. There is casual homophobia and blatant prejudice and ignorance in a lot of people.

Mr Daley and Mr Black announced that they would be welcoming their first child to their family a few months ago. It’s great that they feel that it is right that they can spend the time, effort and financial support it takes for starting a family.

Obviously, this didn’t go down too well with some parts of the press. The revolting Richard Littlejohn decried the idea of two men bringing up a child. The idea of this made him sick, apparently. His dismissal of two gay men bringing up a child is ‘not normal’ and that it ‘shouldn’t be so’. One then assumes, as he claims, not to be ‘homophobic’ he must have also condemned the following celebrity couples who have all used a surrogate? 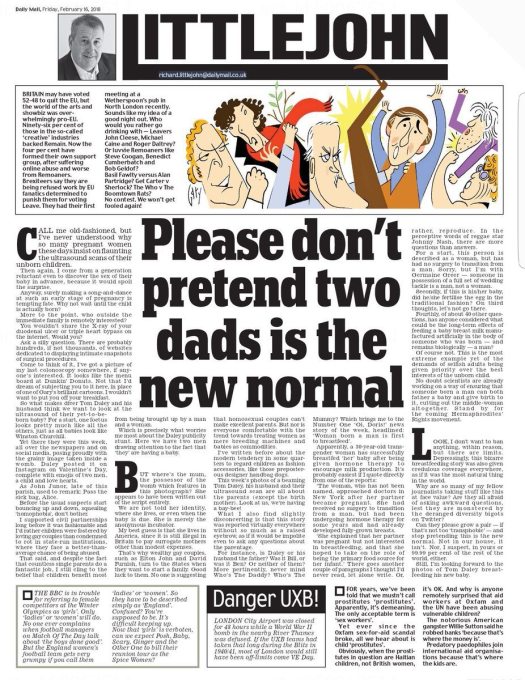 Kanye West and Kim Kardashian, Sarah Jessica Parker and Matthew Broderick, Jimmy Fallon and his wife Nancy Juvenon, Dennis Quaid and his wife, Kelsey Grammar and his now ex-wife, Michael Jackson, Tyra Banks, George Lucas and his wife. I could go on and on. A list of those who have used surrogates is common place in heterosexual couples and gay ones too.

Mr Littlejohn compares the news of an imminent arrival of a new life and sharing this to the world the same as showing photos of a medical exam or even an illness. Which in itself is ridiculous as its celebrating a new life and not some medical procedure.

He states that he isn’t homophobic because he ‘supports civil partnerships’. Echoing the comparable mantra of – “I’m not being racist but …” He then digs himself further by calling the sharing of a sonogram ‘Publicity stunt’.

People like Mr Littlejohn are thankfully now in the minority. I was terrified to come out as gay in the 1980s for the fear of being labelled (that if I did come out) that I must have AIDS. Not even HIV+ but straight to AIDS. It was this ignorance that kept me from telling others who I truly was. I am glad I live in a country where I can get married to another man and that there are laws protecting my sexuality whether it be in the street or at work.

The article that lists the celebrities who have used a surrogate fails to mention the most famous footballer in the world, Cristiano Ronaldo. He has used surrogate mothers for  three of his four children. No one has batted an eyelid. Of course that’s a rich, heterosexual footballer – we can’t have a go at him.

The hypocrisy stinks. If there was anyone trying to court publicity and massage their own ego then its Richard Littlejohn and the revolting rag called the Daily Mail.

Stumbling across the local council’s facebook site I saw that they had flown the flag for International Day Against Homophobia, Transphobia and biphobia. In 2018 you would think attitudes were more tolerant. Nope.

This comment was the most bizarre out of the ones I read. This lady is stating that the council do not have a right to fly a flag above their own town hall in the name of fighting prejudice. I am baffled and confused.

If it had been phrased as a humorous comment then maybe some people might have laughed but it wasn’t. Someone actually stating that they are fed up with hearing and seeing things about those in minority groups really needs to learn some history and see how living as a minority in any country affects someones day to day life.

Also that he has gone out of his way to use his energy and time commenting on it too. What it must be like to be able to live a perfect life away from minorities and be able to function as a decent human being.

In my experience, people who have hatred towards LGBT people have issues themselves and hate that part of themselves that may even have an attraction to the same sex. Those who are comfortable in their own sexuality don’t generally seem to care one bit about those who are trying to change people’s minds.